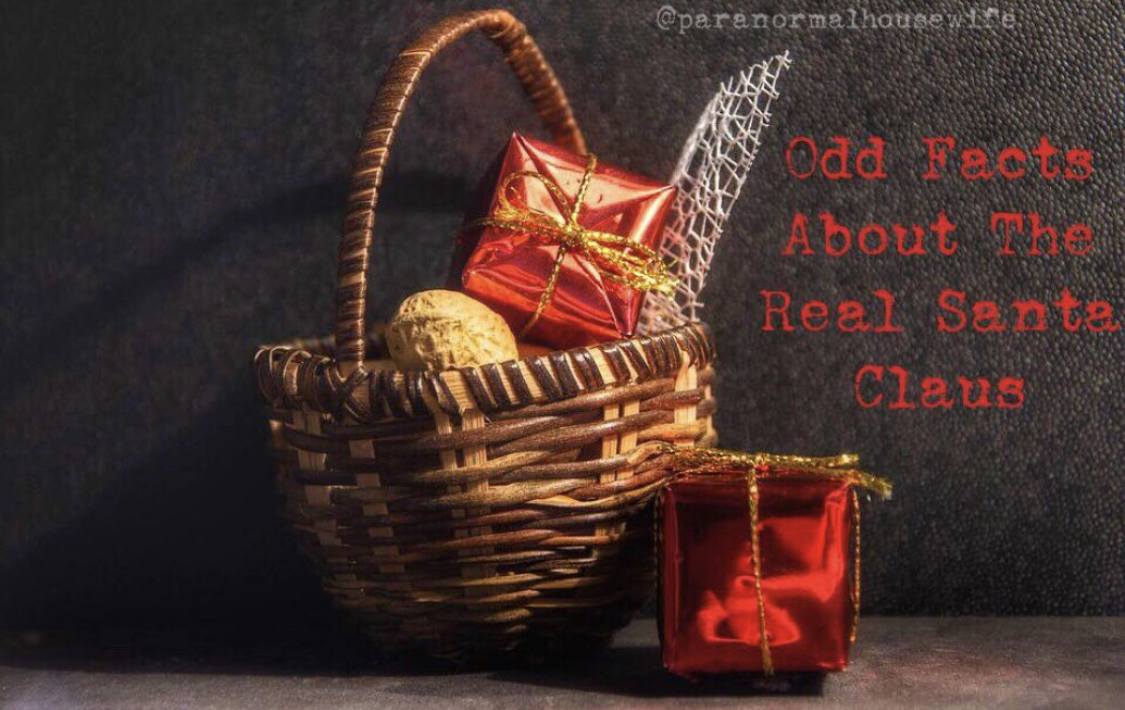 Merry Christmas! I hope that your day is filled with laughter and cheer today. I also hope you are able to be with loved ones or at the very least, be able to call them to wish them a Merry Christmas. This morning I am spending with my handsome husband, my beautiful mother, and three overly spoiled cats.

During one of the posts last week, I briefly mentioned an interesting story involving St. Nicholas and The Pickled Boys. While that story was probably the least Christmasy thing you would associate with Saint Nicholas, it isn’t the only unusual story behind the jolly old man. While doing research for these Christmas posts I ended up coming across a few more interesting stories that I thought you might like to hear.

When we think of Santa Claus, we usually think of a jolly, old, plump man with rosy cheeks, a pipe and dressed in a red and white suit. The original St Nicholas was basically the opposite of the modern Santa Claus. St Nicholas was just barely five feet tall. He was also very thin and in a lot of pain towards the end of his life. Also, Coca-cola is who had Santa Claus start dressing in the red suit. Before the 1930s, Saint Nicholas would wear robes of various hues.

St Nicholas didn’t have the usual start that you hear about with most saints. When St Nicholas was born, he came out of the womb yelling “God be glorified”. I don’t know about you but if one of my kids starts yelling as I’m in the middle of giving birth, I think I would freak the heck out. I would probably wonder if I needed to contact someone in order to do an exorcism. St Nicholas was lucky enough to be born to fairly wealthy parents. Unfortunately, while he was still young, both of his parents ended up getting sick while working with sick individuals. Young St. Nicholas was able to use his wealth to help those in ways that other saints usually weren’t able to help. Like saving three girls from prostitution.

St Nicholas began the tradition of leaving presents anonymously for others in a way that you probably wouldn’t expect. In his town of Patara, there was a widower that had three daughters that were about to come of marrying age. The father was so poor that he couldn’t afford a dowery. To provide for his remaining daughters, the father had planned to sell to the eldest daughter into either prostitution or slavery. St Nicholas heard of this man’s dilemma and threw a bag of gold through either the window or down the chimney (stories conflict on this fact). The bag of gold landed in stockings hanging by the fireplace. The gold was enough to provide a dowry for the eldest daughter. The next two years, as the other sisters came of age, St Nicholas repeated the gift in order for them to be able to find husbands and not have to work as a prostitute or servant.

Not all of St Nicholas’ acts were anonymous. There is an account where he intervened on the behalf of three men who were wrongly scheduled to be executed because of crimes they didn’t do. On the day of the planned execution, St Nicholas stepped up to the executioner and yanked the sword from his hands. St Nicholas threw the sword on the ground and demanded that the three innocent men be set free. Upon witnessed what happened, the man who had committed the original crime stepped forward and confessed his guilt to St Nicholas. St Nicholas pardoned the man and absolved him of his sin.

After St Nicholas died, his bones began to weep a white liquid. The church that was holding his bones began to collect the liquid. They would mix the liquid that they called manna with holy water for people to drink. You can still buy two liters of the manna and holy water mixture from the church. If you do, please let me know. I’m curious to know what it tastes like but not curious enough to actually do it myself.

Another interesting thing about his bones is that they were stolen. Twice. The first time they were stolen from the church in Bari, Italy, a few pieces were left behind. A few years later the same sailors that stole the body originally, came back to the church to collect the missing pieces. St Nicholas now rests in Venice, Italy.

From my family to yours, I wish you all a very Merry Christmas. I hope you all have a safe and happy holiday.