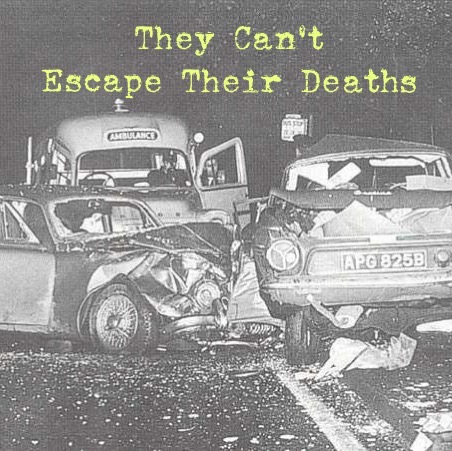 Haunted highways and roads are not something that only exist in the United States. During my research, I found many, many accounts of haunted roadways around the world. The two in today’s post intrigued me the most from all the reports I read because the spirits seem to reliving their deaths over and over again.

The A229 is a highway that is located in Kent, England. Most the incidents I will be discussing that happened on this roadway happened near Blue Bell Hill. The most common spirit that haunts this section is a hitchhiking spirit. She waves down male drivers who are driving alone. She is often spotted near the Lower Bell Pub. She (like most hitchhiking spirits) is dressed in white. When the men pull over, she asks them for a ride before climbing into the back seat. If the driver glances in the backseat during the drive, he will be shocked to see his back seat is empty. The ghost is thought to be Susan or Suzanne Brown. She and two of her friends were killed on November 19, 1963 when their Ford Cortina hit a Jaguar. Browne was killed the night before her wedding.

Other people have reported accidentally hitting a young girl that suddenly appears in front of their car. When they get out of the car to look for damage or an injured child, nothing can be found. Others have reported seeing a pair of people walking along side the road and even crossing the road in front of their car but the couple disappears as the car pulls up beside them.

Another ghost that pops up randomly is that of a young woman. She appears suddenly in front of cars and all the drivers can remember is her bright red scarf before she disappears. Most people think this is the spirit of Emily Trigg. She was murdered by her boyfriend in 1916. Her body wasn’t discovered until 1922 near Blue Bell Hill.

Located in Sydney, Australia, Wakehurst Parkway is a 10 mile long road that has a ghost that likes to appear in different ways to people. Reports of this ghost go back over 50 years. Locally she is known as Kelly.

Kelly is most often seen either standing on the side of the road or in the middle of the road late at night. She disappears when the car swerves to avoid hitting her. Some people have said that they were driving late at night and happen to glance in their back seat to see a thin grey woman with green eyes. When the slam on the brakes and look in the backseat again, she disappears. Other reports say that drivers have stopped to pick a woman standing on the side of the road that appears to be covered in blood. She gets into the car and the driver heads to the hospital but she disappears before they reach the destination.

When Journeys Into The Unknown decided to come to the area to film about Kelly and her hauntings, Kelly decided to pay the production company a visit. The actress that was dressed as Kelly in ghost form had a light appear behind her. None of the production staff could explain where the light was coming from. While in the light, the actress said that she felt all the blood in her body rush to her feet. The production crew noted that she appeared to go white. Other crew members rushed from the set where they became sick. They said later that they were so overwhelmed by the smell of blood that it made them nauseous.

Within the past few years, researchers have determined that Kelly was most likely a local who worked as a nurse at Manly’s Quarantine Station. They theorize this because of the out that she is often reported being in resembles either a nun’s outfit or a bride’s wedding attire. The nurses at the quarantine station wore nurse’s outfits similar to this description. While her exact identity hasn’t been revealed yet, it’s nice to know a little about the living Kelly. Why she haunts this road or why blood is involved with her haunting, is still a mystery.