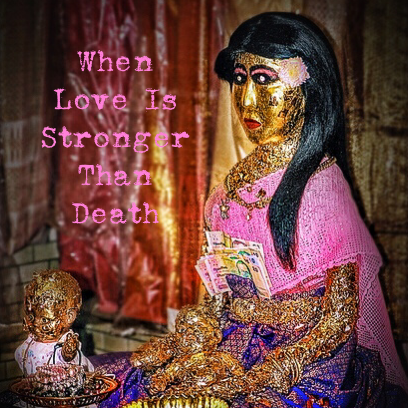 With Valentine’s Day this week, I wanted to focus on stories of ghosts that show love lasts long after death. There is no way that I could have romantic stories this week and not include my favorite spirit love story. I have mentioned this story before in an earlier post but I only briefly told the story. This is the story Nang Nak and her husband Mak.

Nak and Mak lived in Thailand. Most of the stories I heard said that they lived during the 1800s but the exact dates are unknown. Nak and Mak lived happily in their village. They were recently married and she was pregnant with their first child when Mak was called up to go fight in a war against another tribe. Mak is seriously injured while he is gone and ends up being sent to Bangkok for treatment. It takes a while for him to return him.

When Mak does return to his village, he is stunned to realize that none of friends or neighbors greet him or acknowledge his return. He returns to his house and finds his beautiful wife, Nak, and their son. He is happy to be with them again and spends many days at home while Nak preforms her wifely duties around the home. When Mak finally ventures out into the village, a friend tries to tell him that he is living with ghosts and that Nak had died during childbirth when he was gone and that the baby had died as well. Mak, who just spent days with Nak and their son, ignored the friend. He said that Nak was alive. She cooked for him every night and she felt as real as she had before he left. Mak went back to his and Nak’s home despite his friend’s warning.

Mak lived happily with Nak and the baby for several days until he started noticing some things that didn’t make sense. His friend who had tried to warn him had turned up dead. Soon others who tried to warn him about Nak’s true identity ended up dead as well. Then one night, Nak was sitting on the floor preparing a Thai chili when a lime fell through the floorboards on to the ground below. Mak watched horrified as Nak’s arm and hand stretched through the floorboards to the ground several feet below to grab the lime. Mak got up and said that he needed to go outside to use the bathroom. Once outside he ran to the village to tell others what had just happened. Mak stayed in a temple in the village since spirits are not allowed inside a temple.

The villagers wanted to be rid of her spirit so they lit the cottage on fire. This act just made Nak even more upset. In the end, it took the villagers bringing in a Buddhist monk to set her at peace. Her spirit was captured in a bottle which was then tossed into a river. Some people claim that her bottle has since been fished out and her spirit released.

As the story of Nak’s devotion to her husband spread throughout Thailand, women came out to the village to seek Nak’s guidance and protection during childbirth and through marriage. Later when a shrine was created in Nak and her child’s honor, women would come to beg Nak’s spirit to keep their husbands from being called up by the military. (In all honesty, if recruiting duty doesn’t get much better soon, I might be booking a flight to Thailand to make this same prayer to Nak.) People who wish to make an offering either tie a strip of colorful fabric around a Bo tree or present her statue with clothing, lotuses, fruit, or incense. Some women bring toys for Nak’s child to play with.

Nang Nak’s story has been made into many movies. One of them is currently on Netflix. I have seen it before. It’s pretty good. It’s described as a romantic tragedy horror film. You can see the trailer here. If you watch it, let me know what you think about it.