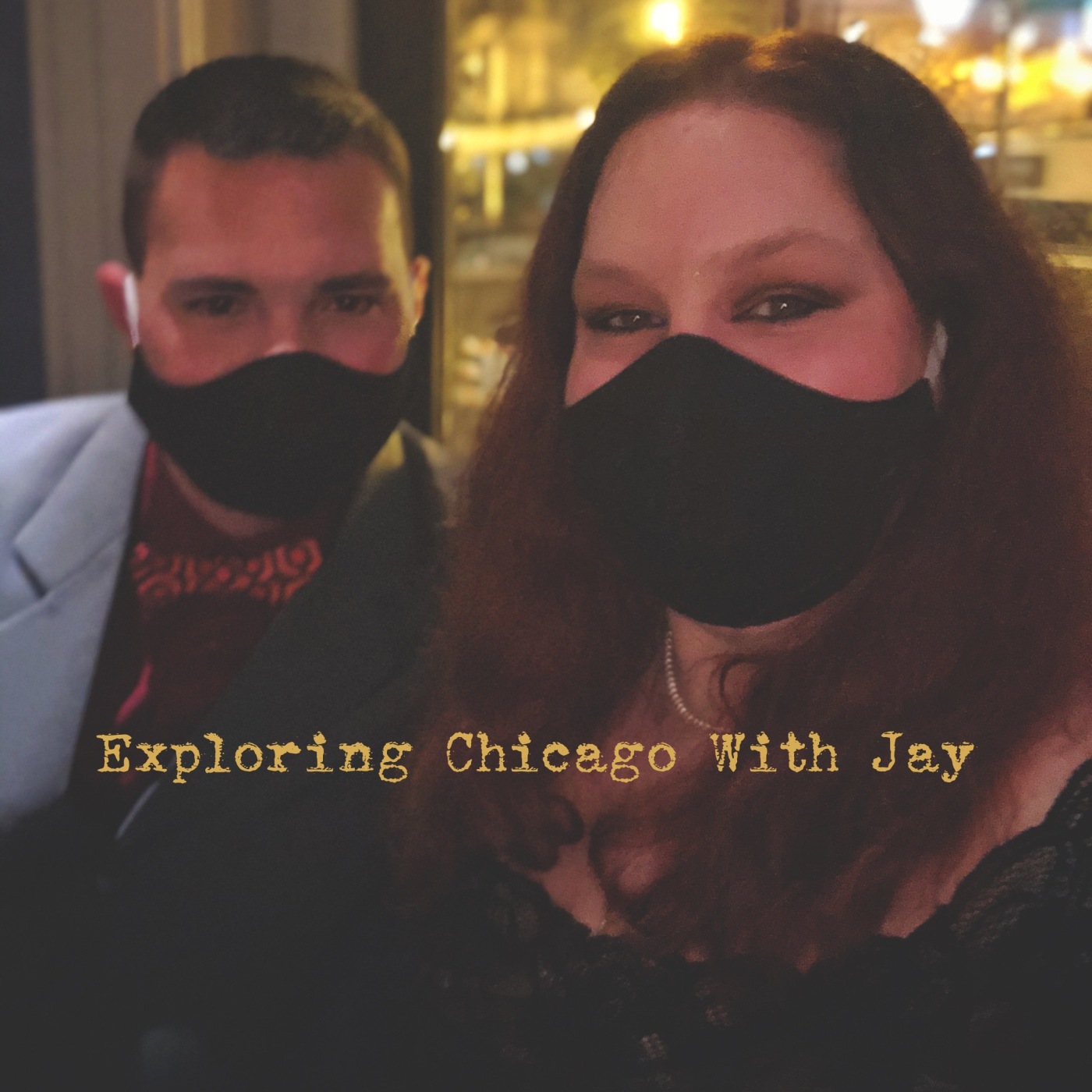 On my last post, I mentioned that Jay and I went to Chicago for the weekend. Originally we were supposed to go Wisconsin for Ghost Con, but that was canceled due to Covid and political unrest. Since Jay had a long weekend off, we took off to Chicago. We decided to take the train up since Jay had never taken the train in the States before. It was really relaxing to take the train up there. It’s about a 2.5-hour ride up there. Jay slept while I listened to music and catnapped. The weather in Chicago was cold, windy, and drizzly but wasn’t that bad. We took a Lyft to our hotel, where they allowed us to check-in early. We relaxed for a little bit before heading back out. We checked out the Bean (aka Cloud Gate). We couldn’t get too close to it because of Covid, but thanks to Covid, we could get great pictures in front of it.

After Cloud Gate, we took another Lyft to Navy Pier. Unfortunately, it was completely shut down. So we took another Lyft to Little Italy. I assumed it would be like China Town where there would be many Italian places to eat and shop. I was wrong. So instead of having Italian as Jay wanted, we had middle eastern food that was delicious. While we were having lunch, Jay found out about a pop-up event that was The Shining themed. It was also surprisingly within walking distance, according to Jay. I learned that two miles is walking distance to him… But I did it.

The pop-up event was so cool! The whole place was had different scenes that you walked through that were from the original movie. Some were even interactive. At one point, there were a couple of actors acting out a part of the movie. It took us about an hour to walk through everything. At the end, there was a bar with themed drinks. I had the Redrum, and Jay had the Come Play With Us. They were both delicious. Before we left the bar, we had to get Bagheera a bowtie that was had the same pattern as the hotel’s carpet. Jay wore it that night night and the next night on our date.

After the pop-up event, we went back to the hotel. While I worked on some stuff in the hotel room, Jay went around the corner to grab us a deep dish pizza. This was Jay’s first deep dish pizza. If you can’t tell so far, this trip was a whole bunch of firsts for him. After dinner, we were lying in bed watching the television. I thought the windows were looking funny. Like they were flickering. I pointed it out to Jay, and he looked out the window. The streets below us had about half a dozen cop cars, a few firetrucks, and a couple of ambulances blocking all the roads. No idea what happened, but they were there for at least 30 minutes before they left.

Continuing with firsts for Jay, the next morning, we went to the Field Museum. I didn’t realize until this trip that he had never been to a museum before. He absolutely loved it. I think he liked the dinosaurs the most. While we were there, I had to recreate a photo my dad did when we went as a family to Chicago 11 years ago. Just like my family trip to the Museum, Jay and I sat outside to eat Chicago dogs from a vendor. The birds harassed us for our bread, but it was fun to feed them.

After the museum, we went back to the hotel to get dressed up. For those of y’all who know us, you know that Jay and I are major foodies. He likes learning how to cook the dishes while I like to try new foods. For our date that night, I surprised Jay with a date we have both wanted to do for a long time. I had made reservations at Topolobampo because it has a Michelin star. We had never been to a Michelin star-rated restaurant before. I have also wanted to do a proper dress-up date. This date was so much better than either of us expected. It turns out Rick Bayless runs the restaurant. I will admit I didn’t know who he was until he came by the table to talk to us. After he walked away, Jay immediately started to freak out and to fangirl. It turns out that he was sitting next to a book by him. Jay has seen many of the shows Rick Bayless was on and knew a lot about him and his career as a chef. The food they served was so delicious. It was Mexican food that was Day of the Dead themed. I honestly couldn’t pick a favorite dish because I wanted more of all the dishes.

We decided that we wanted to check out a couple of witchy shops before getting back on the train on Sunday. The first place we went to was Malliway Bros Magic And Witchcraft. If you are ever in Chicago and need a wonderful metaphysical shop, PLEASE check out Malliway Bros! Their shop is so homey and welcoming. The gentlemen that run the shop are amazing. They are so kind, knowledgeable, and loving. They helped us find everything we needed and didn’t seem bothered at all by all of our questions. While we were shopping, we saw them helping another customer with a spell. After they were finished, I decided to do one as well. The whole process was fun and informative. They love sharing their craft and knowledge with others. Unlike many stores I have been to previously, they try to harvest, make, or locate the items they sell a majority of the items in their store than buying it wholesale to resell. You can feel their love and knowledge in their products. We bought a few things from their shop for our altars.

After our joyful experience at Malliway Bros, we decided to check out one more witchy store, so we went to Alchemy Arts Occult Supply. I regret going to that store. The feeling in the store was the complete opposite of Malliway Bros. One of the workers didn’t greet us and just loudly complained the whole time we were there. The other was too busy stocking things for us to ask any questions. We wandered through the store, though, trying to see if there was anything we needed there. I did find an incense powder I wanted to try. A very chonky kitty hopped up on the counter and kept brushing up against my hand as we were checking out. I went to pet him, but the complaining lady snapped at me to not pet the cat. So I stopped petting him and kept my hand on the counter. The cat kept flopping on my hand and rubbing its head on my hand. After taking my payment, the woman chewed me out for continuing to pet the cat even though I hadn’t moved my hand off the counter, and it was the cat literally throwing itself onto my hand and arm for pets. Don’t ever go to this store. There are better places that deserve your business.

A few days after we came back from Chicago, I got ready to go out job hunting. I had a few places I wanted to drop off my resumé at. I used some of the Abundance oil I purchased at Malliway Bros’ shop to anoint myself, the Maneki-Neko statue on my altar, and my money bowl before heading out. The next day not only did I get a call back from the dealership offering me the job I had interviewed for a few weeks earlier, but I also was approved by Shipt to start working with them as well. I had honestly written off the dealership as an option before this because I figured after having to call the woman I interviewed two days after the interview to tell her I tested positive for Covid, I wouldn’t hear back from her. It turns out I was her top choice, and she wanted to give me time to recover from Covid before calling me. I still credit the Abundance oil from Malliways Bros for these blessings.

I work at a local dealership three days a week. On my days off, I am trying to do some Shipt runs. It’s hard adjusting from not working to working every day, but I am making it work. The pets have been struggling with the changes. The cats never really got used to me working last year when I was at News-Gazette. This past Sunday, Katniss needed all day cuddles from me. Bagheera screams at me until Jeremy comes home and then ignores me. John Paul doesn’t seem too phased by it, but he definitely misses going to daycare. I haven’t been able to find one that I like and can trust that works with my hours. Ruff Dayz has proven to be untrustworthy (that’s a conversation for another day). John Paul is getting extra treats, bones, and toys to make up for being stuck in his bedroom while I work.

I am so sorry for the lack of posts lately. I am starting to sort of find a new routine with my new jobs. I’m trying to find more of a balance between everything. Thank you for your patience while things are crazy for us. I have lots of stuff coming up that I want to share with y’all. So please stay tuned.